 Trying to find the appropriate people to help with moving forward within the community and college to be ahead of the 3rd industrial revolution and build a new purpose and vision for Albion and the College. 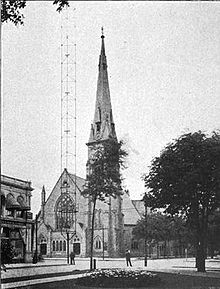 The Methodists were the first congregation to organize in Detroit, and then moving west.

The Methodists were the first congregation to organize in Albion and set the standard for church construction with their grand and glorious structures. Having a Methodist affiliated seminary in town greatly strengthened the local congregation. This brought a number of out of town guests who would come to visit the seminary, to visit the church, and who were interested in seeing Albion advance. In its heyday during the 19th and early 20th centuries, Albion served as home to many leaders in the Methodist Church who would rise to positions of prominence.

Albion Restoration Headquarters was founded on the belief that in a healthy community, anyone can participate in change by informing and inspiring others. The most successful movements have always been born out of and held together by the bonds of real community relationships, and online social networks present never before seen opportunities for organizing. We strive to build ialbion.org for people to mobilize their friends for collective action, spread the word to friends and acquaintances, and eventually launch movements that span real discussions for local impact for the rebirth of Albion into A self-reliant community. Promoting local entrepreneurship helping and working together to put the town back together.  Rebuilding a community for the 21st century leaving behind opportunities for the next generation. Promoting urban farming and organic farming for better health and laying the blueprint for a leed certified town. While training local citizens for new jobs in what will be the new job market. Because we believe there are infinite ways to positively impact our community, anyone can create an advocacy group on ialbion.org.  We strive for equal opportunity activism. Which means that nonprofits and concerned individuals share the same level-playing field? Unlike other models that favor organizations with large budgets, causes rise and fall based on how well leaders organize and keep their communities engaged and mobilized. There is no one way to measure one’s success: a cause can spread awareness to a new demographic, teach users how to make changes in their daily lives, raise money to reach important goals, or encourage people to share personal stories and find support. Whether you are an activist who wants to stop genocide or a nonprofit that promotes literacy, ialbion.org can be your platform. It is a tool to help people go from caring about issues to doing something to make change. Anyone can change the world. And bring back the foundation of the Methodist belief God and Science.

Death Is Not Final

What is becoming of our freedoms?

Is Multicultural immigration rewriting our constitution or the politics of the new corporate world?